#The Cities are bursting at the seams.
#The Rural population is aging.
#The Terrestrial network expansion reaches its limits.
#Satelliten Internet is the solution!
#Give to stem the rural exodus
#Together we can do it.

There are a staggering 22.5 million households in Western Europe alone that don’t have fast broadband access. Include Central and Eastern Europe and this figure rises to 43 million. Collectively, broadband pundits refer to these households as the ‘last 5%’.

There are a staggering 22.5 million households in Western Europe alone that don’t have fast broadband access. Include Central and Eastern Europe and this figure rises to 43 million. Collectively, broadband pundits refer to these households as the ‘last 5%’.

Investment in terrestrial broadband (ADSL, Cable, Fibre etc) has been significant in most Western European countries, but the numbers simply don’t stack-up in terms of return on investment for national providers, or the governments that subsidise them to extend the reach of the existing fibre footprint.

This would be true at any point in the economic cycle, but is especially true when western economies are struggling out of a long recession; there simply isn’t the money to invest in order to give the ‘last 5%’ a fast and reliable terrestrial broadband service.

Ka band satellite broadband services are deployable immediately and have comparable speeds to any terrestrial ADSL service (up to 22 Mb) and now even have large (even unlimited*) data allowances for users (*some countries aren’t eligible for unlimited tariffs).

Monthly costs have come down to levels which are not much different to terrestrial services. There’s now no reason why a customer who is unserved terrestrially or under-served by poor dial-up or ADSL (due to distance from their exchange / quality of copper etc) should not want to consider satellite broadband as the easiest and most immediate route to 21st Century living standards.

So, there’s a huge opportunity to sell to people – maybe to your existing customers – in areas where terrestrial broadband is unsatisfactory for modern living. Even those who thought they’d never need broadband are starting to realise that they do.

Our habits are changing - Increasing demands on broadband usage & Wi-Fi

Its not only PC’s that need fast broadband (according to OFCOM 80% of UK households have a PC). As of July 2012 39% of UK adults owned smartphones and 42% of them said it was their most important device for accessing the internet – this is a trend that is rapidly increasing.

When they’re at home they connect to the internet not via 3G, but by Wi-Fi, and therefore broadband. 3 or 4 smartphones in a home need super-fast broadband to deliver a good user experience. Satellite broadband mates with any normal wired or wireless router to deliver the fast service you need to everywhere in your property.

Ever heard of Turfing?

Turfing is the expression for surfing the internet from an internet enabled and connected TV. Although initially skeptical, a full 65% of buyers of internet enabled TVs have used the facility, according to OFCOM. As ‘smart TV’ sales grow, so will the demand for fast broadband.

These are just a few illustrations of how our day-to-day lives are moving inexorably online. We all see it happening around us every day. 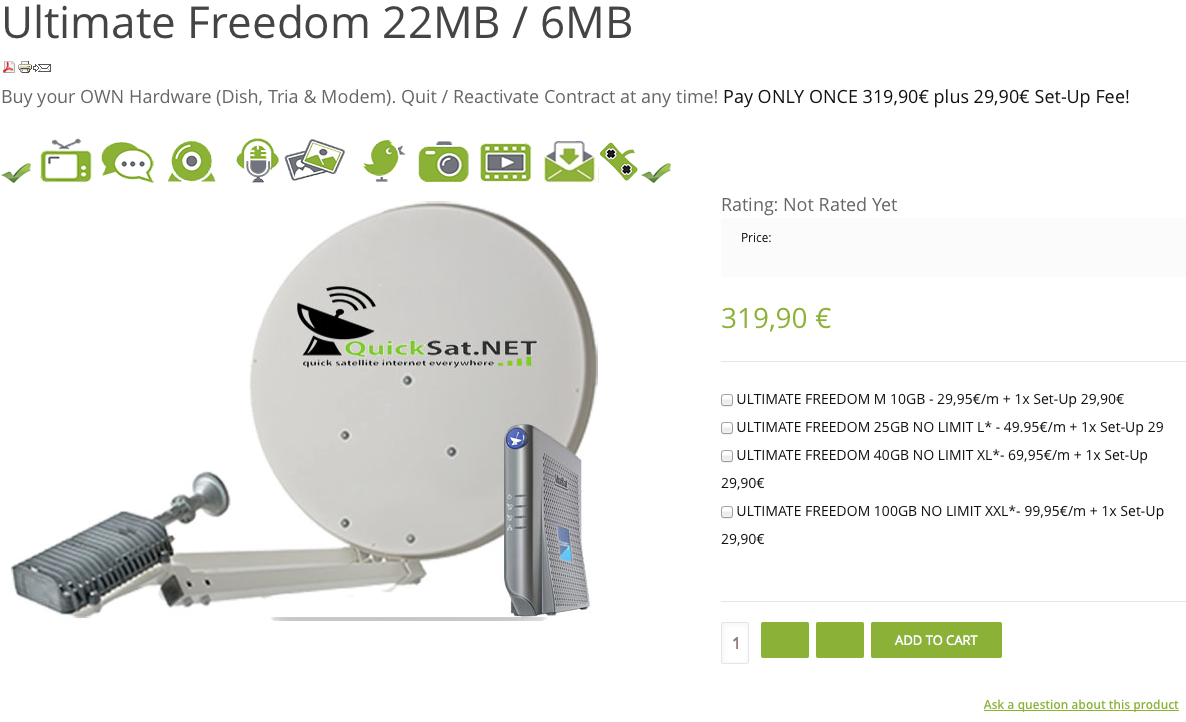 We deliver in more than 27 countries! Our distribution area:

QuickSat.NET Satellite Internet works without fibreglas cable broadband. It works even without a landline! No matter where you are: Mountains, sea, country side, in the woods, on an island, etc. Cookies make it easier for us to provide you with our services. With the usage of our services you permit us to use cookies.
Ok Decline